ELKHART — As plans are being made for a groundbreaking for the new Tolson Center for Community Excellence, 100 Women Who Care Elkhart County awarded a $10,000 grant to the budding community center with historic roots.

At its quarterly meeting in April, the social giving circle voted to give the grant to the project, which is still raising money for the demolition of the longtime building and construction of a new, larger center, as well as the addition of athletic fields to the campus between Benham Avenue and Prairie Street in south central Elkhart.

While the City of Elkhart approved an independent future for the Tolson Center for Community Excellence in August 2021, the Parks and Recreation Department has continued to operate at that location through spring 2022. Tolson’s building closed in late April to prepare for construction and the remarkable next chapter for Tolson.

In partnership with area organizations, the City’s Parks Department and Elkhart Community Schools are offering a full schedule of summer programming for students, with more information at www.elkhart.k12.in.us/summer-sizzles

Tolson has been operated by the City of Elkhart from its opening in 1991 until spring 2022. In this new chapter, the independent non-profit Tolson Center for Community Excellence is led by a fifteen-member board of directors, can accept tax-deductible donations, and is accountable directly to its constituents.

The public is invited to mark Tolson’s next major milestone with a Groundbreaking Celebration from 4 to 7 p.m., Tuesday, May 24. There will be free food, music, and a presentation.

“We really want all of the community to have ownership in this,” said Cyneatha Millsaps, board president. “This Tolson Center is for the city of Elkhart and the surrounding community. It’s housed in south central Elkhart, but is for all of Elkhart County.”

Breanna Allen was named executive director in April and has been meeting the community, including children and parents. “I’ve had so much fun interacting with so many community members,” Allen said. She is also working on details related to the demolition and construction, which is expected to take 18 months starting this summer.

For more information, to volunteer for the groundbreaking celebration or to make a donation, visit www.tolson.org or contact [email protected] 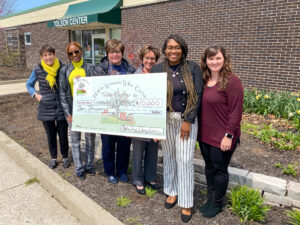 Representatives from Tolson Center for Community Excellence and 100 Women Who Care gather for a photo marking the donation of $10,000 from 100 Women Who Care to the community center. From left are Peggy Lindberg, Cyneatha Millsaps, Kim Miller, Candy Yoder, Breanna Allen and Carrie Berghoff.

The 100 Women Who Care is a component fund of the Community Foundation of Elkhart County. https://www.inspiringgood.org/organization/100-women-elkhart-county/