GOSHEN — Leslie Weirich is working to offer young people tools. She wants them to be resilient, to hold on to hope during tough times.

A $10,000 grant from 100 Women Who Care will help Weirich reach students in two Elkhart County schools for the coming three years.

At the last meeting of the giving circle in January, 100 Women Who Care selected to support Suicide Prevention Work through Leslie’s Hope and the Oaklawn Foundation to offer training to students in Elkhart County schools. For her, the work is deeply personal. Her son Austin died by suicide in September 2016. Two years later, when a teammate ended his life, Leslie began talking more publicly and helping others. In Indiana, someone dies by suicide every eight hours. Weirich wants to prevent as many of those as possible and funding helps. “It’s all about teaching wellness and resilience,” she said.

In October 2021, Weirich took her dream to Oaklawn to get additional suicide prevention programs in our local schools. Schools can now get the Sources of Strength program for free through the partnership that she and Oaklawn have created. Weirich also speaks and advocates nationally to prevent suicide by offering tools for managing stress and anger and building connections, particularly among teens. “Connection is protection,” she said.

Kim Pedler nominated Leslie’s Hope at the 100 Women meeting and presented to the group about its work. Her father had died by suicide. “I knew this needed to be talked about,” she said.

The 100 Women Who Care is a component fund of the Community Foundation of Elkhart County. www.100WomenWhoCareElkhart.com

The group meets quarterly and is open to new members. 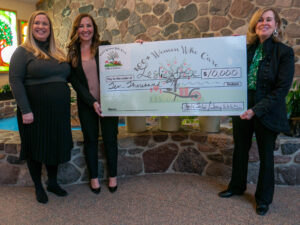