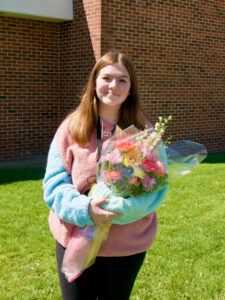 ELKHART, Indiana — You don’t have to be a math whiz to understand that a $5,000 scholarship will help an eighth-grader as they consider college four years from now.

Rhiannon Cass is this year’s recipient of the John G. Blakesley Mathematics Scholarship from the Community Foundation of Elkhart County. She is the daughter of Lauren Brown and Stephen Cass.

The scholarship recognizes exceptional, early aptitude in mathematics by an eighth-grade student completing math honors coursework. This scholarship inspires the development of mathematical interest and understanding.

John G. Blakesley was born in Goshen, Indiana on February 26, 1931 and was raised in Syracuse. He attended New Paris High School as a freshman, winning math awards while attending school there. After moving to Ft. Wayne with his family, he graduated from Ft. Wayne Central High School in 1949, where he again won numerous awards in mathematics. John graduated from Yale University in 1954, majoring in economics and political science.

He asked his niece Cheryl Weaver, executor of his estate, to create scholarships for young people in Elkhart County after his death. “My Uncle John valued education, and he worked very hard to pay his way through college. The education he received created pathways for a rich and full life. He wanted to make sure others had the same opportunity,” Weaver said.

The scholarship given annually to an Elkhart County student is for $1,250 for four years of study at an accredited school after high school graduation. “This scholarship gives an eighth-grader a head start as they prepare for college and also inspires their classmates to think about their futures and how they want to pursue their education,” said Amanda Jamison, Senior Program Officer for the foundation.

For more information on the range of scholarships offered by the Community Foundation, call (574) 295-8761 or go to www.InspiringGood.org/scholarships.