Education is an Investment in People

How one family has invested everything in Elkhart.

The Johnson family has been a mainstay of Elkhart and its members have been generous investors in the community through the years.

If we treated people like stocks in the stock market, Leonard W. Johnson, Jr. was like Berkshire Hathaway. He was a great investment. He graduated high school at age 14, the youngest graduate in Elkhart Community Schools history. He went on to get his Doctor of Medicine degree from Howard University, walking before his 23rd birthday. He tacked on a Master’s Degree in Public Health from Harvard University just a few years later. While maintaining a private practice and residency at a hospital was the more traditional path, it wasn’t enough for Leonard. He felt that he was missing something.

Leonard joined the Air Force, entering flight school and aiming to practice medicine for the soldiers. Less than a decade later he was a Lieutenant Colonel. By 1968, Leonard became the first African American doctor of Aerospace Medicine. That’s right: he had accomplished all of this despite the obvious hurdles of life in mid-century America as an African American. In 1971, at age 39, Leonard was made full Colonel, the second-youngest person to ever hold that rank.

After earning the title of Chief Flight Surgeon, the highest title possible for an Air Force doctor, he moved to Washington, D.C. There, Leonard became the dean of the School of Medicine at the prestigious Uniformed Services University.

During his tenure, Leonard oversaw nearly a quarter of a million medical airlifts or evacuations. Positioned in the Philippines, Leonard was instrumental in the evacuation of countless POWs from Vietnam, including the well-known Saigon evacuation. He may not always be known, but when he is, it’s mind-blowing.

The story of Leonard is one that could hardly be contained in a novel, but it’s those little, lesser-known tidbits of character that make man out of myth. For one, Leonard’s education was made possible in part by a generous scholarship granted to him by the people of his hometown. Dr. Rex Douglas, a long-time Kiwanis member and club president at the time, awarded Leonard $500 toward his education. For Leonard, that $500 wasn’t a gift. It wasn’t a reward for work done well. It wasn’t a lottery he had won or an essay contest he had bested. For Leonard, that $500 was an investment.

Investments ought to be returned with interest. So, when Leonard had finished his education and established a successful medical career, he returned every penny of the investment to the Elkhart Kiwanis Club. In fact, he doubled it. This simple act inspired a scholarship fund to be opened in his name at the Community Foundation of Elkhart County. The Kiwanis Club of Elkhart — Leonard W. Johnson Scholarship would help minorities in Elkhart in perpetuity, proving yet again: Leonard Johnson was a good investment.

The Johnsons were all at the top of their craft, though. And like any good brother, Levar sat out on his back lawn jabbing some of his brother’s accomplishments with a wry smile. Levar’s sense of humor is dry. Drier than a day-old scone. And even at the age of 80, he loves keeping folks on their toes. He spoke fondly of his brother, but he wasn’t gushy.

But as he told Leonard’s story, it was clear that his own rivaled it. Leonard was undoubtedly at the top of his craft, but though he’d never say it, so too was Levar. Levar was possibly the most sought-after school leader in the whole of Elkhart County. When a problem arose, it was always Levar’s name bolded and highlighted at the top of the list. He was a fixer. In public school lingo, they’d say he excelled at “school turnarounds”.

Really, he excelled at students. He got them. He knew what drove them. He didn’t get caught up in the ebb and flow of public education trends. He didn’t need SMART Boards or iPads or Promethean Panels to make change. He knew that the pendulum of public education would oscillate wildly over the years, and that he’d be strongest by simply plowing ahead at the equilibrium point. And plow ahead he did. Moving from teacher to assistant principal and eventually to principal, he oversaw the gradual (and sometimes drastic) long-term improvement in Elkhart schools.

He’s retired now. His home is perfect. Grass cut and edged as if with a ruler, level, and a pair of hand shears. Pool perfectly clear — not a leaf floating atop the surface. He’s a doer, and it shows. He can’t sit idle. It’s probably why his retirement count is rivaled only by Brett Favre.

Leonard invested in his community by repaying his scholarship, but Levar…Levar invested in the community in sweat equity. He poured his soul into hundreds of thousands of kids moving through the halls of his schools. Levar has been a good investment and an even better investor.

Opposite Levar in the backyard of his childhood home sits his son, Levon Johnson. Levar is no slouch, looking spry and athletic in his own right. But, objects next to Levon may be larger than they appear.

A former college football standout and high school coach, Levon still finds time for his hometown and his community.

Levon was one of the next ggenerations of Elkhart Johnsons. He toyed with the idea of moving away, going so far as to accept an offer in the southwest. But his heart was back home in Elkhart, Indiana. As in so many small towns, in Elkhart being successful and leaving are considered synonymous to so many young kids. Levon was among them, never thinking he’d be here in the long run. But when the time came, his heart guided him to where he was most needed. As soon as he made the decision to stay, Levon got to work making Elkhart the home he wanted it to be — he started a little home improvement.

He began working as a teacher in Elkhart Community Schools, where he impacted hundreds of young lives. But his calling was something a bit different than that. He was offered and accepted the role of assistant principal at Elkhart Central High School and then principal at Pierre Moran Middle School. He involved himself in tons of extracurriculars, believing in the change-making power of sports and clubs. Levon would even become the head football coach at Elkhart Central for seven seasons.

Levon has been a pillar in the community. He has impacted thousands of lives as an educator, a coach, a mentor, and a leader. He has even worked closely with the Community Foundation of Elkhart County for years, helping to manage the foundation that manages his uncle Leonard’s scholarship fund. But still, his calling was something a bit different than that.

When the phone rang, he knew he couldn’t pass it up. Just last year, Levon became the newest president and CEO of the Elkhart Chamber of Commerce.

Levon has been a good investment, and he’s proving to be an even better investor.

In many ways, education is an investment. No doubt, Leonard was a great investment. Leonard’s Kiwanis scholarship is both a return on that investment and an even bigger investment in the future of the place that made him.

But that scholarship is hardly the story of investment from the Johnson family. In many ways, the investments Elkhart has made in Levar and Levon have proven to be even more fruitful. 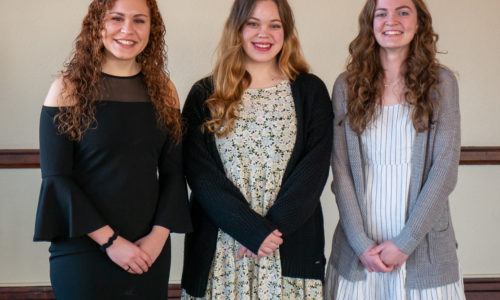