Selecting and Making a Gift

When an individual, a couple or a family wish to establish a fund with the Community Foundation of Elkhart County, deciding on the level of active engagement is one of the first steps. Some donors choose to remain actively engaged in the annual grant-making decisions, while others prefer to establish an endowment to benefit a specific organization and maintain assets to help ensure the sustainability of the organization.

The latter, a Designated Fund, is one type of gift Dick and Linda Armstrong were confident in making. Dick wanted to create a fund that would have a long-term impact on the charities that were most important to Linda and to him. It was important for them, particularly for Dick as a financial executive by profession, to give efficiently as well as to give locally.

Over the decades, the Armstongs have given generous gifts through the Community Foundation in a variety of ways. Whether using cash, stocks or IRA distributions, Dick and Linda leveraged their charitable giving by creating designated funds for organizations such as the Bristol Food Pantry and the Riverview Adult Day Center maximizing on the Community Foundation’s 25% matching program. Creating these designated funds allowed them to one, honor the memory of Dick’s brother who suffered from Alzheimer’s and two, make a continual impact on an organization where Dick and Linda wanted to maintain their annual giving through endowment.

Throughout their lifetime, the Armstrongs have also planted other seeds of endowment building that continue to flourish and provide enrichment to our community. As founding donors they created the designated scholarship for Elkhart Memorial High School. Their generosity didn’t stop there. Dick and Linda continue to ensure the scholarship fund is feed with annual contributions that are once again matched by the Community Foundations.

As Dick expressed it, “We’ve been successful, and we’ve been blessed; we’re believers in the importance of payback. We make our own choices in how we support the community. We would hope that others who have been fortunate will give, perhaps to the scholarship programs. Youth are our future. As we help them develop, they’ll grow into more civic-minded adults.”

Wanting to keep their charitable giving simple and efficient, the Armstrongs have also used the Community Foundation as a one-stop charitable conduit. They have made pass-through donations directly to a nonprofit organization of their choice and some have been contributions to other agency endowments held at the Community Foundation. This was extremely convenient when Dick and Linda decided to capitalize on the IRA Charitable Rollover (see sidebar). Being able to direct one check from their IRA that could then be designated to several organizations was an attractive option.

Regardless of how the Armstrongs have chosen to make their charitable gifts, one things remain consistent – their deeply seated roots in our community.

Another way of giving: IRA distributions

As of December 2015, the IRA Charitable Rollover was signed into permanent law, allowing taxpayers age 70 ½ or older to transfer up to $100,000 annually from their IRA accounts directly to charity without first having to recognize the distribution as income. If you have any questions about your IRA or giving a distribution charitably to a cause you care about, contact the Community Foundation at 574.295.8761. 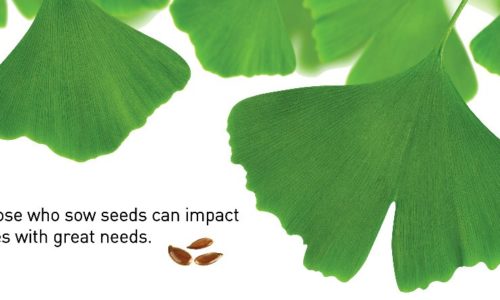 Gathering In and Giving Out