PHOTO: During the week of December 11th, the Community Foundation Scholarship Committee surprised the Lilly Endowment Community Scholarship recipients at their respective schools. Steven Fields, from Concord High School was awarded the 2018 LECS during his lunch hour.

Nine local students learned this week they will receive significant scholarships from  the Independent Colleges of Indiana through the Lilly Endowment Community Scholarship Program and the Community Foundation of Elkhart County.  All scholarships are awarded to first-generation college students.

Three students from Elkhart County will receive Lilly Endowment Community Scholarships (LECS), covering full tuition, fees and $900 a year for required books and equipment to any accredited public or private nonprofit college or university in Indiana. The LECS program has awarded 82 LECS to students in Elkhart County. The 2018 selected students are:

In addition, the Community Foundation is also proud to award the Guy David Gundlach Memorial Scholarship to six students. Each will receive $5,000 per year for four years to any accredited Indiana college or university.  This memorial scholarship is one of the many positive initiatives established due to Mr. Gundlach’s gift in 2011. Since the inception of the scholarship, 30 Elkhart County students have received this $20,000 award.  This year’s recipients are:

“These scholarships make a considerable impact, not only in the lives of these students and their families, but also on the educational and economic future of our county.”

ELIGIBILITY AND SCHOLARSHIP PROCESS
Each of the eligible high schools in Elkhart County selects one nominee based on academic performance (including grades and course load), extra-curricular and civic involvement, work experience, career goals, interview and an essay. “We work very hard to make sure the process is fair and without bias,” said Amanda Jamison, Community Foundation Program Officer.

After the scholarship committee receives the applications, names are removed, and the applications are scored by committee and staff. The essays are scored by Goshen College professors.  Finalists’ applications are forwarded to Independent Colleges of Indiana, Inc. (ICI),  a non-profit corporation, representing 30 regionally accredited, degree-granting, nonprofit independent colleges and universities in the state, for final selection of the recipients.

The Lilly Endowment Community Scholarships are the result of a statewide Lilly Endowment initiative are 1) to help raise the level of educational attainment in Indiana; 2) to increase awareness of the beneficial roles Indiana community foundations can play in their communities; and 3) to encourage and support the efforts of current and past Lilly Endowment Community Scholars to engage with each other and with Indiana business, governmental, educational, nonprofit and civic leaders to improve the quality of life in Indiana generally and in local communities throughout the state. The program, now in its 21st year, has awarded 4,340 state-wide, thus far providing more than $372 million dollars in tuition scholarships since inception. 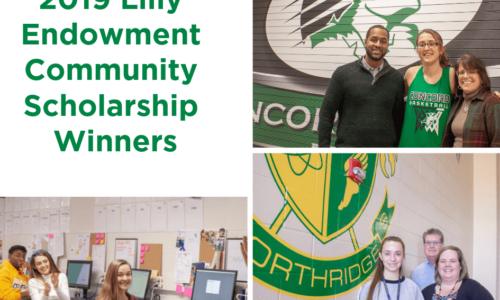