Guy David Gundlach was a world traveler and a giver to charities around the world, but he always considered Elkhart his home. That’s why, when he died of a heart attack last year at 56, he left nearly everything – a staggering gift of roughly $125 million – to the Elkhart County Community Foundation.

His mother, Marge Swift, is his only survivor and is clearly proud of her son, but his final gift is only part of that. It was a surprise to her, and something over which she has no control.

She’s proud of the man he was. His photos are all over her living room, and she talks about how much fun he had in life.

“Delightful young man is all I can say. We were buddies and stayed buddies until the very end,” she said.

Thought Gundlach lived in England for years and spent time in various parts of the world and accross the U.S., “he was happy here,” Swift said.

When Gundlach was young, he and his widowed mother moved in with her mother, Josephine Riblet, who’d suffered a stroke. He’d come home from school at lunch every day to spend time with his grandmother. “The two of them settled the world’s problems every noon,” Swift said.

When Gundlach was 12, after losing his older brother, Michael, in a motorcycle accident, his grandmother arranged to send him on an educational world tour with a group of high school students.

Already an inquisitive child whose mind was always going, “it opened up his mind to other parts of the world,” Swift said.

Gundlach graduated from Elkhart Memorial High School in 1973, then went to college in California, where he graduated in 1979 from Chapman College. At one point at the University of Southern California, he was on the same dorm floor with Ron Howard, he told the Elkhart Truth in 2010.

As he worked his way through college – “No grass grew under his feet, I tell you,” Swift said – Gundlach traveled the world every chance he got.

The history major joined IBM, which led him to Lloyd’s of London. From there, he founded Hastings Direct, an insurance company he ran for a decade. Though insurance wasn’t his first choice, he did follow the footsteps of his father, Melvin Gundlach, a World War II veteran who’d worked in the insurance industry.

In his 2010 Truth interview, Gundlach showed what a private man he was by downplaying his wealth, saying, “I made a bit of money in insurance, then came back to the states.”

Even his mom didn’t realize how much money her son had. She knew some of his generosity, though, watching it develop through his life. “I thought it was outstandingly great because he wanted to share.”

Even his mom didn’t realize how much money her son had. She knew some of his generosity, though, watching it develop through his life.

“Wherever children were is where he was interested,” said Elizabeth Borger, a friend of his who’s settling the estate.

The level of his final generosity was news to his mother. “It’s something I wasn’t aware of. I think it made a lot of people aware of what he was doing that nobody knew. He kept it very quiet, something he was interested in, making sure his money was put to good use. He never bragged about it.”

He had a fancy lifestyle, “but in the meantime he was donating to things we weren’t aware of. He just wanted to share,” Swift said.

Gundlach loved to tell his mother about his travels. “He got a big thrill out of all of them. He really did,” She said.

A few years ago, Gundlach approached Borger. They knew of each other in high school, only a year apart, and Gundlach asked her to take care of his mother’s finances. From there, Borger and her husband struck up a friendship with Gundlach.

“He really had a passion for excellence,” Borger said of her friend.

“He learned about entrepreneurship in Elkhart,” She said. “He made his money in London and took great risks.” He had a real zest for life, too. “He had a huge, hearty laugh. When David laughed, you could hear it from a long way away,” Borger said.

“He was a student of the world. He could speak to politics, religion,” Borger said.

He dabbled in movie production, serving as a producer of “Get Low,” a 2009 film that starred Robert Duvall and Sissy Spacek and Bill Murray. The Movie won the 2011 Independent Spirit Award for Best First Feature, but it was his only foray into film, even though it was a dream come true for Gundlach. “He said, ‘Mother, that’s hard work, and I didn’t know it was that much work,'” Swift said, chuckling at the memory. “Once was enough”

Gundlach loved attending Premier Arts Shows. “He loved the theater here in Elkhart,” Borger said. “He was a big advocate of Premier Arts.”

Borger said her friend was opinionated and fascinated with others’ opinions. “He wanted to hear what people thought and why they thought it,” she said.

He also wasn’t shy about debating those opinions. “He loved that, that challenge,” Swift said.

At home, he was a member of Elcona and Christiana Creek country clubs. “Golf was his middle name,” Swift said. She said the Elcona golf pro, George Thomas, “always got such a kick out of him, saying he was out here since he was born and his golf game hasn’t improved that much.”

He loved the Fourth of July at Elcona and loved the fireworks. “He thought it was the best of Americana,” Borger said. Gundlach was always researching children’s charities, his mother said. “Such a sweethert,” she said. “I’ve lost everybody.”

But she knows her son’s legacy will live on. 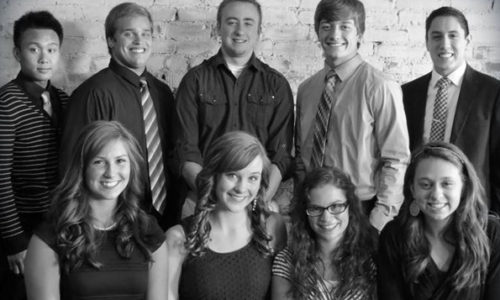