A Rodin sculpture will carry forward the Ruthmere legacy

When Walter Beardsley purchased an Auguste Rodin sculpture for $50,000 in 1969, he hoped it would be more than a beautiful piece of art to display. He donated it to the Ruthmere Museum with the intention that it could one day help secure the legacy of the museum that honors his family — Elkhart’s founding family.

“The sale of ‘The Caryatid’ was the fulfillment of Walter Beardsley’s original
intention, to give something to Ruthmere to benefit the Elkhart community not only in art, but in the longevity of the institution of Ruthmere,” says Bill Firstenberger, executive director of the Ruthmere Museum.

“It was essentially an endowment legacy gift. Instead of being a chunk of money that resided in a bank or in investments, it resided in a piece of beautiful artwork.”

That beautiful artwork, a limestone sculpture of a woman carrying a large stone, sat on display atop a grand staircase at the Ruthmere mansion for 40 years. Though it was beloved, it was often overlooked as guests focused on the early American paintings, Tiffany lamps, and five other Rodin sculptures in Ruthmere’s collection.

It took almost a year for the Ruthmere Foundation Inc., to decide to sell “The Fallen Caryatid.”

When Ed Beardsley, nephew of Walter Beardsley, became president of the Ruthmere Foundation in 2015, he wanted to secure Ruthmere’s future as a community asset for Elkhart, not just a family asset. Both the Ruthmere mansion and Havilah Beardsley House on the Ruthmere campus were  in
need of some repairs and updates. Growing the museum’s endowment would allow Ruthmere to complete the necessary repairs and give the museum funds to expand programming and events.

In 2018, the Ruthmere Champions campaign for sustainability launched with a goal of $10 million. Many people stepped up to contribute, but the foundation knew it had to show the community it was serious too.

At a board meeting a year into the campaign drive, Walter’s son Robert Beardsley put up his hand and made a momentous suggestion: selling Rodin’s “The Fallen Caryatid.” After all, that was Walter’s original intention.

Ed launched a task force, which consulted with donors and stakeholders. Two auction houses, including Sotheby’s, immediately sent teams to Elkhart to evaluate Rodin’s sculpture. After several months, the foundation agreed to sell the sculpture, entrusting the task to Sotheby’s.

The Rodin sculpture left Ruthmere on Aug. 12, 2019, and traveled under armed guard first to New York, then Paris, then back to New York for some conservation work. From there, it went on display in Sotheby’s London gallery for a week before returning to New York for a two-week
display. The trip culminated in the auction, a four-minute bidding war that pushed the total price to more than $7.5 million and netting Ruthmere $5.89 million.

“This piece of artwork, which was not integral to the history of the house, is a huge stepping stone to create a long-term endowment that will sustain Ruthmere for well into future generations,” Ed says.

Selling the Rodin sculpture wasn’t the only important change that has helped secure Ruthmere’s future. The museum itself, as well as the foundation that manages it, also evolved.

“Robert’s vision was that Ruthmere could be a focal point for art, culture, decorative arts, interior design, and architecture.”

That’s in line with the mission of Ruthmere. It’s more than the Beardsley family’s legacy as the founding family of Elkhart; it’s a gift to the entire Elkhart community.

Shortly after Robert Beardsley led the restoration effort to open the Ruthmere mansion as a public museum, he brought a 1955 concert Grand D Steinway piano, the largest piano Steinway makes and favorite practice piano of Arthur Rubenstein, to the museum.

“Robert’s vision was that Ruthmere could be a focal point for art, culture, decorative arts, interior design, and architecture,” Firstenberger says.

Beardsley believed musicians from all over the world would travel to Elkhart to play the Steinway and he’s right. Ruthmere hosts a series of concerts every fall in Ruthmere’s game room. The fall concert series led to the launch of the annual Robert B. Beardsley Piano Prize competition in 2017. Firstenberger called the series and competition “one of Robert Beardsley’s greatest legacies for Elkhart.”

“The beauty of this is we are getting a whole new generation of incredible performers exposed to Ruthmere and we get to help them in their careers,” Firstenberger says. “We get to serve as a piano virtuoso garden, hosting
and nurturing world class talent to the benefit of our local community, the patrons who support the arts, and whoever wants to enjoy it.”

“We have a robust volunteer group. That has been critical to the Ruthmere,” says Janet Evanega, Second Vice President of the Ruthmere Foundation. “Our docents are unbelievable, the knowledge they have is just incredible.”

In an effort to make the museum even more accessible to the Elkhart community, Ruthmere began a field trip assistance program for area schools, including private schools and homeschooled students. Schools bring students for free tours of the campus. Each field trip student receives a Ruthmere membership that lasts until they graduate from high school.

When schools were struggling to pay for school busses to transport students for the field trips, Ruthmere received a grant from the Community Foundation of Elkhart County to pay for transportation. About 3,000 students, mostly in third or fourth grade, annually tour the museum thanks to this program. Ruthmere and the Havilah Beardsley House leave a lasting impression on the students, whether it’s teaching them Elkhart’s history, fostering an appreciation for art or inspiring them to follow a career path they may not have otherwise considered.

“Jonathan Tuff, owner of Garber’s Interior Design, had his career path forged because he went through Ruthmere as a child. He came back several times to see the beauty. He started studying the design, who did the furnishings… He was in school during the restoration,” Evanega says. Now Tuff is one of the Community Board members serving the Ruthmere Foundation.

The school field trip program, music series and other events will be able to continue and expand thanks to the successful sale of the sculpture and the ongoing Champions Campaign. The money, much of which will be managed by the Community Foundation, is also giving the museum the ability to complete its repair projects and expand its programming for the Elkhart
community and other visitors.

In summer 2021, Ruthmere is bringing an original world-class exhibit of Wedgewood ceramics to campus, which will put the museum on the national map of museum destinations. Ruthmere is also looking to partner with other local organizations to expand programming.

At the same time, Ruthmere is committed to staying fiscally conservative so that the entire Elkhart community can enjoy Ruthmere for generations to come.

“We see the sale of ‘The Fallen Caryatid’ as a way that we can continually step up to the community to show them that we’re worthy of their support and worthy of fulfilling the bold mission of what we can be to our community, this region, and the nation,” Firstenberger says. “We’re not there yet, but that’s the path we’re on.”

That path doesn’t have a terminal destination but is instead about continuing to be a valuable asset enjoyed by the entire Elkhart community.

This story appeared in the 2020 Annual Report. 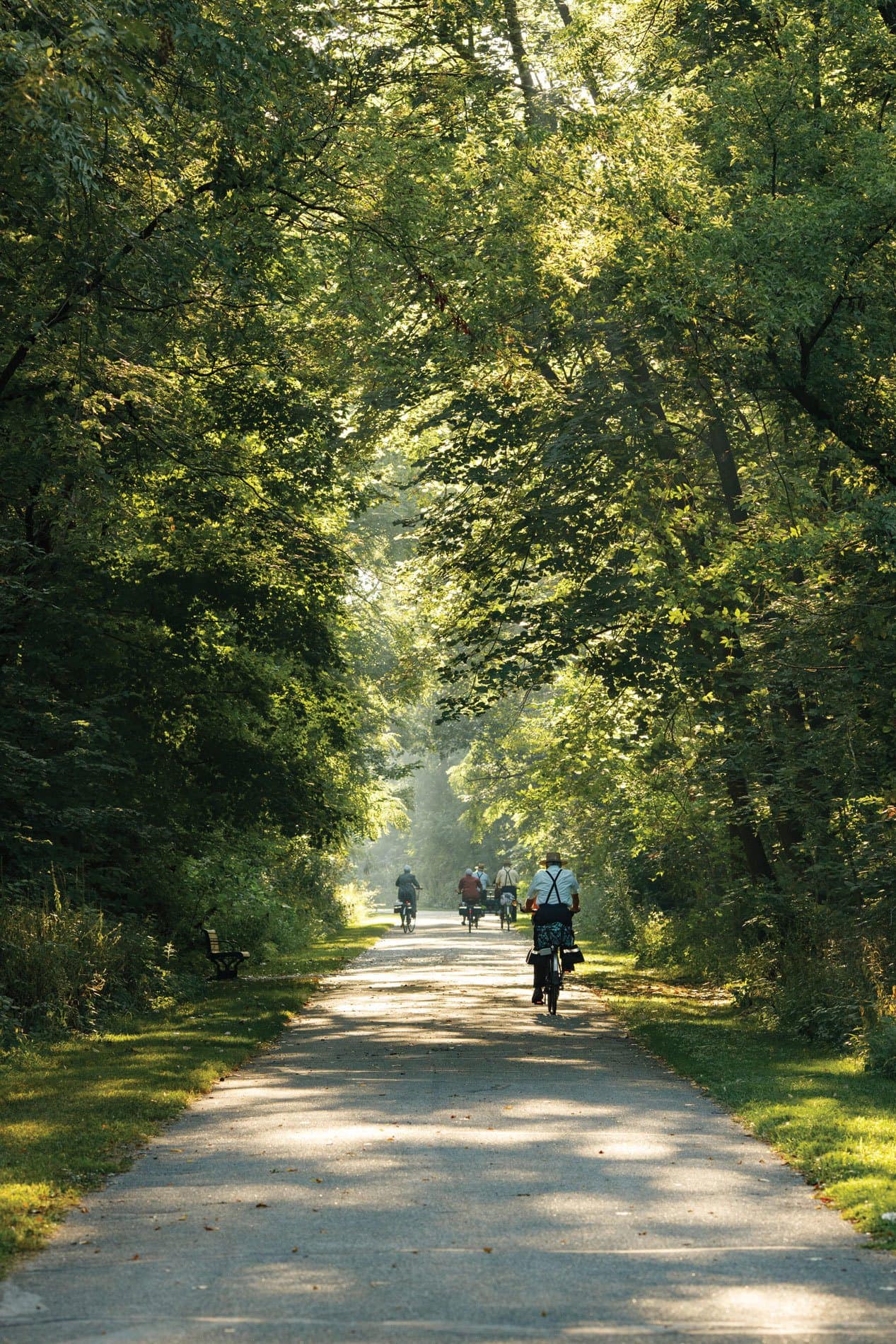